You are here: Home / Guides / Why You Should Always Carry a Folding Map on You – Even With Google Maps

It seems like the advancements of modern technology occasionally set us back in certain scenarios nowadays.

We rely so much on a smartphone that it begins to make us forget how important it is to use other products and supplies.

Everything is on our phones now, from compasses to cameras and maps to calculators.

With all this information in one area, why should you ever invest in a real camera?

Or a real calculator?

Or even a real map?

Google Maps tells you how to go from one place to another, so a handheld map almost seems pointless now, right?

The problem with relying on smartphones for all these tools is that a smartphone has a limited battery life, and a folding map doesn’t.

When you’re lost somewhere, whether it’s on the road or in the wilderness, your phone will eventually die and you’ll be doomed, unless you’re a natural survivalist, in which case it will still be unfortunate to be lost.

No solar or battery bank will keep your phone alive long enough to find out where you are, especially in a wilderness scenario.

Picking the right map for you is key to make sure you’re always safe and ready to deal with being lost without panicking.

What Maps Should I Get?

There’s a few things to look for when choosing a paper map, starting with the location on the map itself.

You can get massive maps that cover the whole world, but you’re probably not worried about what’s going on in Argentina if you’re lost in Wisconsin, USA.

You should have a couple maps, honestly.

One map should be a map of the world, tucked away in your glove box of your car or in your backpack if you’re hiking.

The second map should be a map of the state you’re in, or county, or general vicinity (if there’s no states in your country).

Having a map might seem like an inconvenience at times, but the lightweight issue is definitely better than finding yourself in a life or death situation without one.

Personally, I even like keeping a map book that has all the hiking trails, city maps, etc. in my area.

That might be overboard, but I’ve always been someone who likes to stay prepared for the worst in case it gets to that.

As far as folding maps vs book maps, if I had to choose one it would be a folding map because you can take it anywhere and they’re nearly weightless.

The Top 3 Folding Maps to Choose From

Now that you know all about what you should get, or what you want to get, here are a few examples of some folding maps that’ll make it a little easier to get out of being lost.

Rand McNally maps are probably the best maps out there, because they have everything you need from interstates to rest stops and gas stations.

This one in particular is very small, and can be thrown into a pocket or anywhere in your backpack.

Currently, they’re priced at just below $5.00, which is a killer deal.

Streetwise maps are good for the big cities that you visit, I chose the Bay Area because I grew up there.

You can find Streetwise maps for pretty much any major city, and they’re key for helping you navigate the area.

Regional maps are also a solid choice to make sure you don’t get lost in parts of the country that you’re not used to.

Personally, being from the West I chose the Western United States Regional Map.

These maps are great to have around, even if it’s just for a little directional guidance when Google isn’t working or your phone isn’t getting service.

Why is a Physical Map Better than Google Maps?

There’s several reasons that a real, tangible map is 100% better than Google Maps.

Sure, Google Maps is convenient, it tells you directions, and it can literally talk out loud to you so you can focus on driving.

However, your physical map isn’t for every day usage, it’s meant for problematic issues that cause you to be lost and this is what makes it better.

As you can see, these are just some of the many reasons why having a physical map is much better and more beneficial than using Google Maps.

That being said, there are some cons to having a physical map and you can check them out below.

In the end, Google Maps or any other smartphone map will always be the preferred choice of the masses as we go about our everyday lives.

I’m not trying to convince you to drop your app and only use a physical map, but I want you to realize how important it is to be aware of your surroundings and how to develop the much-lacking skill of intrinsic navigation.

They’re about $4 to $10, so why not save yourself from a terrible situation in the future?

In my opinion, staying safe and prepared is worth the price of a fast food meal any day of the week.

How to Begin Prepping for Disaster Without Breaking the Bank
Next Post: Does The Sawyer Products MINI Water Filtration System Actually Work? 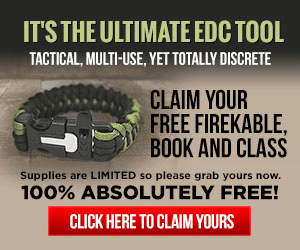